skip to main | skip to sidebar

So if you've ever asked yourself, 'can one ever see too many wild animals in Africa?', the answer is 'no', followed by, 'it is always awesome.' 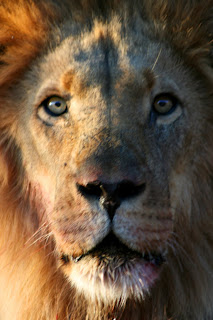 This weekend Todd and I headed out to another game farm, located directly across the street from Dustenbrook called Okapuka Game Lodge. Okapuka is a a slightly more modern, less German game lodge with a beautiful restaurant and bar housed under a huge thatched roof overlooking a huge field of warthogs eating mud. 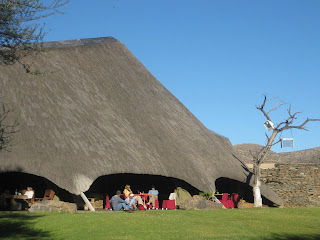 We decided to go to Okapuka for the lion feeding last Sunday afternoon. They have a full game drive with rhinos, giraffes, and other various game of the antelope type, but with a trip to Ethosha National Park next weekend (the mother of all game drive and animal viewing) we stuck to the feline feeding, for Namibian $75 (US$10.00).

We arrived early to the park and decided to hike around the lodge before the lion feeding. As we crossed over the rickety bridge that took us away from the lodge and into the 'bush' one does start to ponder questions like, 'when the signs say 'Crocodiles and Lions- ENTER AT OWN RISK”, do they really mean that they are just out and about and we could get eaten?'

Needless to say, though we paused to consider our odds, we decided they would be unlikely to let people walk on the hiking trails if there was a good chance you’d become dinner, so we glanced back once more at the “ENTER AT OWN RISK” sign and soldiered on. 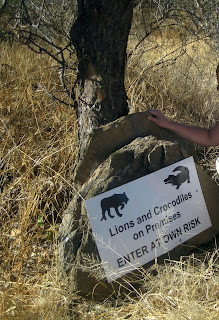 One of the first things we came across was a huge wall constructed of dark bricks with benches in front and slats carved out for what we deduced was for peeping. When we saw the array of stripped bones and a contraption that appeared to safely move large animal carcasses into the pit we confirmed that this was definitely the lion pen and the location where the lion feeding would occur later. As we learned last week, it doesn’t take long for these animals to learn when free food arrives, so despite our efforts and our trekking along the outside of the pen where the electricity that ran through the fence was buzzing Jurassic Park style, we had no luck in seeing any lions...yet.

There is one thing that all excellent trackers know; it’s all in the poop. Take my word for it; there is no shortage of poop on the trails at Okapuka and despite my outrageous claims of being an excellent tracker, I actually have no idea what I’m looking at most of the time. Although I will admit that in spite of yourself when you start to see some big poop, I do get excited.

While navigating the hiking trails and looking for game we crossed a dry river bed where we frightened off some springbok and moved up into a huge plain, which is absolutely the picture of an African Safari setting from all the movies. The tall golden grass is speckled with single trees that are shaped so bizarrely they look like they belong in a Tim Burton movie. Another thing becomes immediately apparent when you are on the empty plain which is this: there is no where to hide and there is no way you are going to outrun anything out here. This message only became reinforced when Todd stumbled upon the remains of an antelope leg, mostly bone but some skin and the hoof still intact.

Despite our/my uneasiness about being easy targets for hungry game animals, we spotted a large group of oryx across the plain and decided to make our way over to them to see how close we could get before we spooked them. As we were weaving our way through the tall grass, Todd came to an abrupt halt, and I followed his eyes to the shadow of a tree where two sets of ears were perked up at our intrusion. Now, when ears appear out of the tall grass, obviously my immediate thought was, “Oh God, it’s a lion, we are going to get eaten”, but just as that thought passed, the owner of the ears shot his pom-pom of a tail up into the air and with his distinctive waddle, moved on from us, because warthogs have no interest in us as dinner, we are not mud. 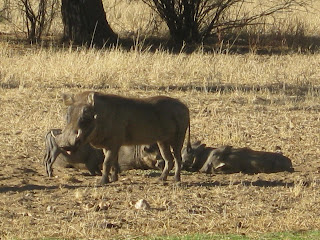 The sun was moving down in the sky...well that-along with my constant refrain to Todd of, “have I mentioned that this doesn’t seem like a good idea,” urged us to move back out of the tall grass into the river bed and back to the lodge to await our lion feeding trip.

Having scoped out the lion viewing situation in advance, we were both a little disappointed that this lion feeding would not be a repeat of the Dustenbrok feedings where cheetahs perched their front paws on the car doors like house pets waiting for a treat, and nothing stopped a leopard from leaping into the seat next to you, expect for the bucket of meat in the front that he was momentarily more concerned with. Even so, we had strategized our viewing arrangements in advance and made our way out to the peeping wall with the rest of the group.

Once we were seated, the guide began to crank back the contraption that safely provided dinner to the lions. At the sound of the crank a massive, massive lion appeared out of the tall grass and began to claw his feet into the ground (a sign of dominance).

There is really no way to describe to you how large lions are, even the photos don’t do them justice. And while Todd claims he could take a cheetah in a fight (one on one), there was no doubt that a lion deserves his place as king of the jungle. As soon as the meat was cranked into the enclosure, the lion grasped it in his enormous jaws and dragged it back into the middle of the enclosure and went to work. This guy is the only male, and is over 20 years old. The guide informed us that is was rare for lions to live that long in the wild with all the stress of hunting and finding food, but in parks like Okapuka they can live upwards of 30 years. 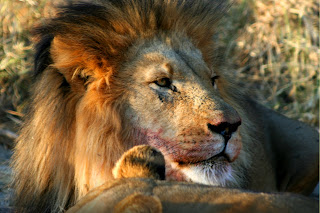 Once the lion had made some serious progress, and an appropriate amount of respectful time had elapsed a young female bounded down out of the brush, and practically tackled the lion for the meat. Apparently this kind of behavior is rare for a female, but the guide informed us that she must be in heat or pregnant, because that’s the only time the lion allows for her to interrupt his dinner before he’s ready. Men!. 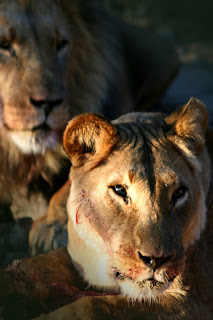 The two continued to feast while a slew of photos and videos were being captured. The lion, similarly to the leopard last week, has this way of looking you right in the eye, and it gives you chills. 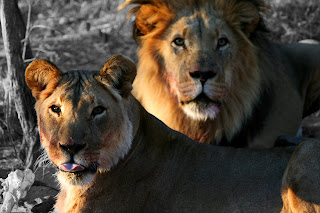 About twenty minutes later a second female appeared out of the brush, but she hung way back and watched the two feast. She is the oldest, and too weak to get into a scuffle over who gets to eat first, so she patiently waits in the wings until the second group of tourist show up, and a second piece of meat is placed in the enclosure. 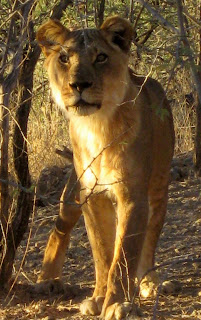 It is difficult to describe the size and strength of the lions in their features and movement, but it was a sight to see, and was definitely worth the trip to Okapuka .

Later, when I arrived to work on Monday, the two local Namibians in my office told me that a few months ago, a guide had been eaten by lions while he was attempting to free a stuck piece of meat in the contraption, and apparently Japanese tourists caught the whole thing on tape.