skip to main | skip to sidebar

We have been in Windhoek, Namibia, for two weeks, and as of today we are officially in our apartment and settled into our new home. It was a frustrating two weeks, as I will detail below, but things are looking up now; we have an apartment, a car, a few potential friends, and a plan for getting out and seeing some wildlife this weekend.

The Living Situation
After a 28-hour, door-to-door journey, we were collected at the airport and informed that we would not be moving into our apartment as promised. We were being placed in a temporary apartment for ‘some time’ while another Expat was being put into our future apartment. Inconvenient, yes, but also frustrating because the woman occupying our apartment was going to have to move again also when, in ‘some time’, her house became available.

‘Some time’ is never something you want to hear in a foreign country because it could mean a few hours or an eternity. Anyway, we unpacked as little as we could, and settled into an efficiency apartment, called the Jan Jonker, and tried to make the best of it. The building was centrally located, and our unit was stocked with all the appliances and amenities we needed. Unfortunately it also had all the charisma of a midwestern motel room, with grey walls, dirty carpets, and a point-blank view of a neon, gas station sign that burned through our mesh curtains throughout the night. Our future, modern apartment was less than a mile away, but beyond our reach, at least for ‘some time’ yet.

What was worse was that because the US embassy only reserved the apartment for Meghan, the Jan Jonker staff tried to charge us an extra US$30 a day for an extra person, yours truly. For that kind of money in the third world I expect a lot in return, and the Jan Jonker did not deliver. Besides that, I am cheap. So, that afternoon I turned in my key and started my stint ‘on the lamb’ to avoid the charge. Every morning I would leave the apartment, before the staff arrived, and return in the evening, after they had gone home for the night. Once I returned around lunchtime, but I ran into a staff member who asked me for money, so then I just stayed away. Between the multiple coffees, meals, taxi rides, and beer tastings around town, I am not sure I saved much of the US$30 per day, but sometimes it’s the principle of the thing.

Windhoek is small for an African capital. In fact it’s small for any capital with just over 220,000 inhabitants. The city center consists of one main drag, Independence Avenue, a half mile long, lined with shops, restaurants, administrative buildings, and a few tall office complexes. The broad sidewalks are clean and dotted with white and black people heading to work, street peddlers in blue bibs selling newspapers, and tourists in khaki clothing head-to-toe drinking coffee in open-air cafés. There are very few beggars, few people in non-western clothing, and few vehicles. The air is clean, dry, and free of the piercing sirens of Washington, D.C.

When the tropical sun goes down, at 5:10 on the dot, almost everyone leaves the city center and the town becomes empty. Almost no one lives downtown, and with only a few bars and restaurants, and even fewer music venues, I can see why. Nightlife exists, as far as I can tell, inside a mall at the south end of town that houses the movie theatre, an African version of an American Steakhouse complete with cowhide seat covers, and a seafood restaurant that reminds me of Sizzler. In such a city it soon became obvious that Meg and I needed to buy a car to get us out of Windhoek and around Namibia early and often. We would not be able to just get by renting a car once a month as we had thought.

So, during the first week, while Meg attended the Global AIDS Implementers Conference in the swanky conference center, and lunched with the President of Namibia, I stalked every dusty and polluted industrial area of Windhoek and every used car salesman I could find there.

The Kia brand does not conjure images of safaris through the African ‘bush’, and for good reason. However, this is the dry season in South Western Africa, so I only need a two-wheel-drive car, and they say a Kia will do fine. The 2003 Rio has a puny 1.3 liter engine, and does 0-60 mph in somewhere around eleven seconds, and has only three inches of clearance over its 14” pizza bagel wheels. It is right hand drive, like all cars here, and when I test-drove it, the engine spun nicely, just like Charky’s old Singer sewing machine. The Rio also has a four-star crash rating from every angle, and dual front airbags in case we forget to drive on the wrong side of the road. It seemed like the perfect choice, and we could actually afford it, so we decided to buy it. 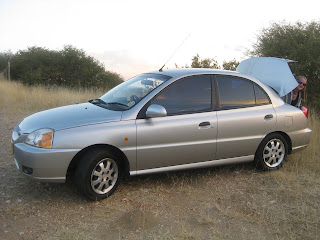 Paying for the car, however, proved to be just as frustrating as our living situation. The problem was that our slightly shady car dealer, Jaco, (pronounced in Yaco in Afrikaans), does not accept credit cards. Security protocol at our banks would not allow us to authorize a transfer into his account from abroad, credit limitations stopped us from pulling the money out of credits cards as a cash advance, and debit card limitations stopped us from pulling the total amount out of our checking accounts. So, despite having sufficient funds to pay for the car, we could not purchase it.

After many days of finding out the limitations of my provincial, North Carolina bank who shall remain nameless, the US embassy said they could cash one of Meghan’s personal checks for local currency. It would cost us no interest points, just a normal transaction as if it had taken place in the States. It was the perfect solution to a frustrating dilemma. Why Meghan has her checkbook with her in Africa I have no idea, but thank Jobu she does because the car was delivered yesterday, and I love that little, silver thing. 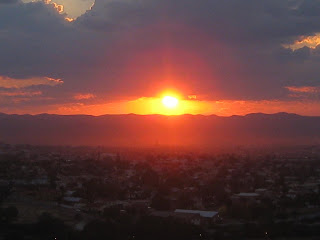 Our apartment is on the third, and top floor of a building that looks like an oversize garage. It is a modern and secure building with a remote controlled gate to the property and an alarm system inside the unit. Coming through the front door there is a guest bedroom on the right, east, side and a long eat-in-kitchen straight ahead. Beyond the kitchen there is a large TV room that finishes at a wall of windows and a set of French doors that lead to a balcony. To the right of the TV room is the master bedroom with its balcony, and the master bathroom. The master bathroom has a shower and separate tub, and enough closet space to make any girl swoon. The tin roof is over twenty feet above us, with tall skylights where it meets the walls. The place is very bright and airy, and the rooms are well appointed. It is perfect, and it is great to be finally settled.

The guest bedroom has twin beds, and its own bathroom, so we are hoping to take foreign visitors out on safari in the Kia in the near future.

Hope to see you in Africa. 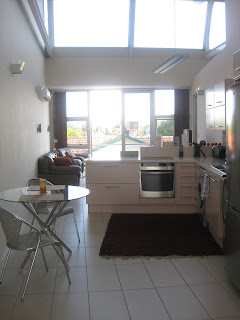 Our Apt. from the front door 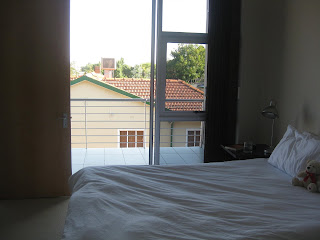 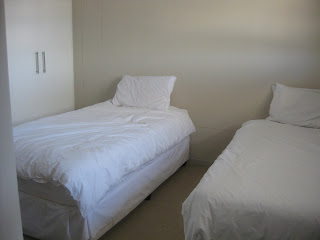